Toyota’s fuel-cell-vehicle designers and engineers clearly got the memo when company president Akio Toyoda declared two years ago there will be “no more boring cars” from the automaker. The 2021 Toyota Mirai fuel-cell EV, which will go on sale in California in late 2020, looks nothing like its—and we’re being charitable here—awkward-looking predecessor. The “coupe-inspired” sedan is longer, lower, wider, and more aerodynamic, says Jackie Birdsall, senior engineer for fuel-cell development. Perhaps most important, it will become the first new rear-wheel-drive Toyota sedan to be sold in the U.S. since the early 1980s.

Northeast states may be added to the U.S. market prior to the late-’20 launch as efforts to build up the region’s refueling infrastructure are completed.

Fuel-cell vehicles “will one day be as common as hybrid Toyotas,” Birdsall asserted at a sneak peek of the new Mirai ahead of its official unveiling late this month at the Tokyo Motor Show. The ’21 Toyota Mirai handles like no other fuel-cell vehicle, and is “an important preview into the future of Toyota,” she adds. 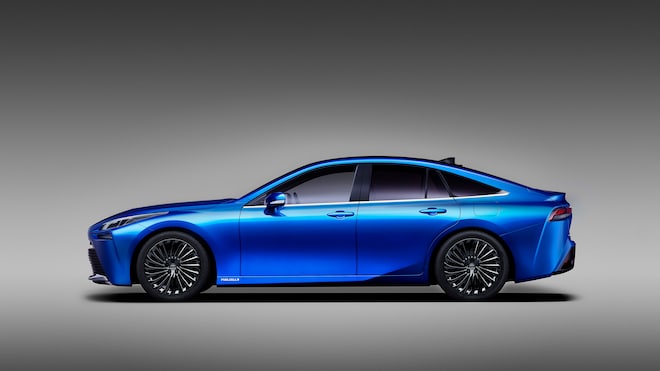 Save for its Avalon-like lower front fascia, the ’21 Mirai looks like it could be a Lexus. The outgoing, first-generation Mirai was launched for the 2015 model year and was considered for the Lexus luxury brand, according to Doug Murtha, Toyota’s group vice president for corporate strategy and planning. But the car instead serves as a kind of flagship for Toyota, and maintains the marque’s reputation for technical innovation. Consideration of an SUV or crossover-style body was rejected because the Mirai must appeal to other markets outside of America, he said.

What Toyota got was a potential Tesla Model S competitor. The ungainly 2015–2020 Toyota Mirai starts at just under $60,000 in California, where it is served by hydrogen refueling stations in the Los Angeles, San Francisco, and San Diego areas. Most customers there, about 6,000 in all, lease the car. The new model, at 195.8 inches long by 74.2 inches wide and 57.8 inches tall, is slightly bigger than a Lexus GS. (The respective deltas are 3.7, 1.8, and 0.5 inches.) Its 114.9-inch wheelbase is 2.7 inches longer than the GS’s. While the current Mirai has 2+2 seating, the ’21 model will open up rear-seat room to help accommodate up to five passengers instead of four. 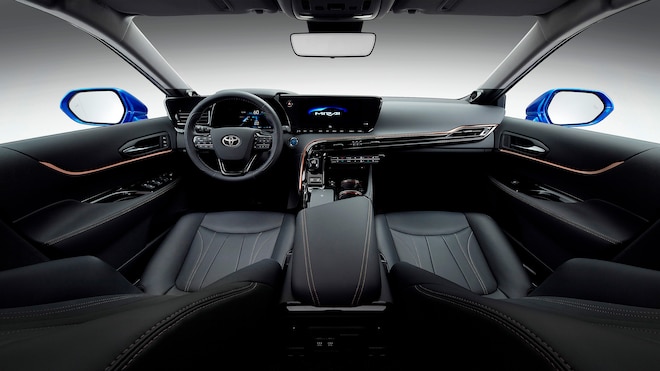 As important as the styling are engineering breakthroughs for the second-generation Mirai. Toyota has targeted a 30 percent improvement in range over the current model, which is EPA-rated for 67 MPGe in both the city and on the highway. Range on the current model is 312 miles, 48 miles short of the Honda Clarity FCV’s range, so more than 400 miles on a full tank of hydrogen for the ’21 Mirai is significant.

Toyota is not revealing anything about the Mirai’s fuel-cell powertrain or layout, though considering the long hood, the fuel-cell stack is likely placed under it, while the motor or motors powering the rear wheels can be placed anywhere. A full refueling will take about five minutes, assuming you can find one of the rare hydrogen filling stations in the U.S.